Curtain up on Who Killed Don Giovanni? Act I Scene 1 and… uproarious laughter? Curiously scanning the program, “isn’t this Don Giovanni?”  the story of the arrogant lothario who abuses, offends, and scandalizes everyone he contacts? Back to the opera and sure enough, the laughter continues…

How can this be? Don Giovanni is commonly believed to be Mozart’s darkest opera. However, this is Caitlin Vincent‘s adaptation of the infamous Lorenzo da Ponte libretto, Who Killed Don Giovanni? The hilarious whodunit is a new spin on the classic Don Juan tale that “blurs the line between straight theater and opera and reveals what could have happened to the black-hearted villain everyone loves to hate.” The Figaro Project presented the re-imagined work with humor but it would not have been nearly as successful without the high quality singing and musicianship. 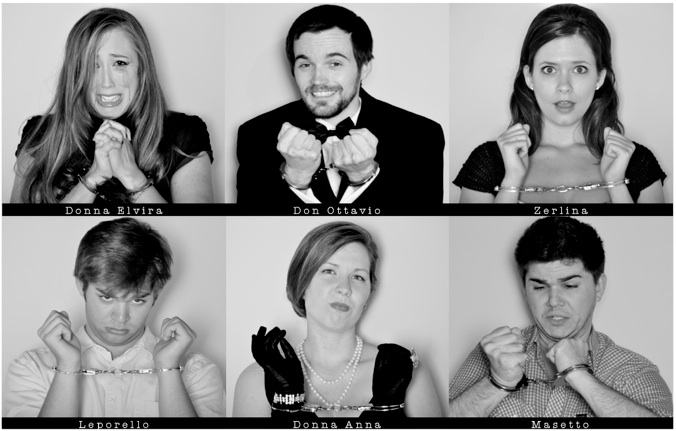 The stage in the Lucy and Vernon Wright Theater on the University of Baltimore campus was sparsely decked to resemble a backstage area complete with makeup mirror, clothes racks, and a desk overflowing with Italian verb conjugation guides which is just the beginning of William Schaller‘s brilliance in stage direction. The Figaro Project’s story begins where the opera usually ends. The characters are celebrating Don Giovanni being dragged to hell by the statue of the Commendatore when Inspector Sebastian Lorenzo enters.  Lorenzo attempts to interrogate the rest of the cast by doing a sort of operatic play-by-play. Since Don Giovanni is missing, the Inspector is only so happy to sing his parts. Nathan Wyatt (Lorenzo/Don Giovanni) carried the momentum throughout the show with his hearty baritone sound and impeccable timing.

Any Don Giovanni wouldn’t be complete without his trusty servant and sidekick, Leporello. Alex Rosen‘s Leporello stole the show in many ways. The Catalog Aria, “Madamina, il catalogo è questo”, is one of Mozart’s most famous bass arias and is often a vehicle for overacting. However, Rosen found a way to ham it up for the audience without losing his vibrant vocal quality. Rosen was a good foil for the rest of the characters throughout the performance. Jessica Hanel Satava (Donna Elvira) had plenty of opportunities to use her best “crazy eyes” while fuming at either Don Giovanni or Leporello in stunning aria form.

Fortunately, this adaptation does not interfere with Mozart’s skillful ensemble building. The couples, Lydia Beasley (Donna Anna) and Stephen Campbell (Don Ottavio) as well as Caitlin Vincent (Zerlina) and Greg Hoyt (Masetto), provided thrilling musical moments. Beasley and Campbell had both comedic and serious moments. Beasley sang with power and sensitivity in “Non mi dir” while Campbell was endearing in his “Il mio tesoro.” Vincent’s “Vedrai carino”, although provocative, was marked by overarching phrasing. Greg Hoyt uses his tender baritone to underscore Masetto’s jealousy. Jeremy Hirsch, as the stage director called upon to sing the Commendatore, was comically wrathful before he drags Don Giovanni off to hell. Although there were some tempi disagreements in the final ensemble and moments of rapid-fire text, the ensemble was lucky to have Ta-Wei Tsai at the piano and Blair Skinner keeping it all together.

The Figaro Project certainly has a flair for this type of production. The high-caliber singing and playing was only heightened by taking such a humorous and inventive look at the original. One would hope that The Figaro Project plans to take this piece to larger audiences. In a slightly abridged version, Who Killed Don Giovanni? would be a wonderful outreach tool for opera. This is a true example of making opera accessible and engaging.