Although the temps outside keep dropping, my mind is drifting to warmer times. The smell of sunscreen wafts into my consciousness. That might just be my coconut water; however, it’s not stopping me from hearing the constant drum of a wave machine and screeches from swimmers plunging down waterslides. I am being transported to the hottest day of the year. The day that everyone and their gay uncle decide to go to the waterpark. You waltz into the park, drop your stuff on the first available lounger, and make a beeline to the oasis of the wave pool. To your dismay, it’s packed! (Of course it is, people would have brought their dogs if it wasn’t against the health code.) Still, it’s the hottest day of the year and you will not retreat. You may barely have enough room to tread water, but gosh-darn-it, you’re going in. 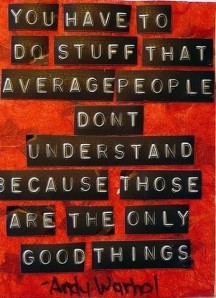 It always amazes me at these instances how unafraid children are to dive right in to the craziness. They have no qualms about slipping around the hundreds of people holding post in their section of the pool and staking claim on the waves right as they come out of the machine. They paddle forward and sideways and backwards until they have reached their destination while I worry about taking an elbow to the face. The thought occurred to me – how often do I tread away waiting for open water before taking action? When will I feel that same childlike urge to capitalize on the moment and charge towards the wall?

Well, there’s no such thing as the perfect time. If you didn’t already realize the heavy-laden metaphor, we’re talking about careers here. Now is the time to realize that it doesn’t matter where you are on your journey, it’s the hottest day of the whole damn year and you are in the wave pool. Perhaps you are holding on to the edge of the pool after a particularly brutal audition season. Perhaps your audition season wasn’t so terrible and you’re looking at a summer/year full of opportunities. Wherever you are, it’s time to figure out how to move forward and ride the big waves. It’s time to figure out how to let go of the ledge and paddle around all the other people in the pool. Like I said, you may barely have enough room to tread water, but gosh-darn-it, you’re going in.

To boil it down further – Doing stuff = great.

Regressing – or worse, being too afraid to try = not great.

Bringing myself back to the colder temperatures, I spotted this picture over at Presentation Zen and loved its easy association between running and “the journey.” Sybaritic Faithful, don’t wait until wave pool weather to commit yourself again to forward motion. Get started and don’t stop ’til you get there.