The folks over at Opera America have this great post…

In the article, Mr. Rincón interviews Santa Fe Opera’s General Director Charles MacKay and composer Ricky Ian Gordon to “list five recordings every singer should own and give a brief statement about why each recording is so important.” As performers we understand that listening to other performances can be a valuable tool. But, like power tools, it should be used with caution. Listening to great singers can provide us with great insight into performance practice. However, we should all strive to be our own voices in this business. What makes us special is our knowledge of legendary singers/performances and our ability to sound completely unique.

I have reprinted their responses here for your enjoyment.

RCA Victor Orchestra, Robert Shaw Chorale
Renato Cellini, conductor
Zinka Milanov, Jussi Björling, Leonard Warren
RCA 6643
“It’s hard to imagine a better trio of Verdians than in this legendary lineup — this recording really turned me onto opera. Zinka Milanov’s singing of the great 4th act aria is simply unrivaled in terms of tonal beauty and floating pianissimi. Björling sings like a god and Warren shows us what a real Verdi baritone sounds like. Enrico Caruso once said that to perform Trovatore, you only need the three greatest singers in the world. From 1955, here they are!”

I Puritani (Bellini)
London Symphony Orchestra
Richard Bonynge, conductor
Joan Sutherland, Luciano Pavarotti, Piero Cappuccilli, Nicolai Ghiaurov
Decca Import 00289 417 5882
“This recording is an extraordinary document of bel canto. It captures Pavarotti in his splendid vocal prime and Sutherland at her mature best. The tenor’s opening aria, “A te o Cara” is a death-defying showpiece for the tenor, who has to walk on stage and sing this treacherously high and sustained aria, ending with a high C# — and Pavarotti sets the gold standard here. Don’t miss the incredible F in altissimo sung by Pavarotti. Sutherland offers vocal fireworks aplenty and, while she might be a bit bland dramatically, this is a treasurable document of one of her signature roles. Cappuccilli and Ghiaurov raise the rafters in “Suoni la tromba.” It’s only available as an import, but it’s not to be missed.”

The Rake’s Progress (Stravinsky)
Royal Philharmonic Orchestra
Igor Stravinsky, conductor
Judith Raskin, Alexander Young, Regina Sarfaty, John Reardon
Sony 710311
“There are other more recent recordings of Rake’s Progress but this one gives us Stravinsky’s own reading of his marvelous score and the singers, while not international stars, give us stellar interpretations of their roles. Judith Raskin’s Anne Truelove is especially heartfelt and beautifully sung. Raskin, Reardon and Sarfaty were very important American singers of the 1960s and 70s; they had sung the roles in Santa Fe early in their careers under the careful supervision of the composer. This recording brings the opera vividly to life and the sound is excellent.”

Die Zauberflöte (Mozart)
Philharmonia Orchestra
Otto Klemperer, conductor
Gundula Janowitz, Nicolai Gedda, Lucia Popp, Walter Berry, Gottlob Frick, Elisabeth Schwarzkopf, Christa Ludwig
EMI Classics 0724356738522
“Again, there are more recent recordings of Zauberflöte with wonderful singers and conductors, but this is my first choice. Klemperer is perhaps a bit deliberate with tempi, but he brings wonderful musicianship and detail to his reading of the score. The recording boasts the incredibly deluxe casting of Elizabeth Schwarzkopf and Christa Ludwig as the First and Second Ladies, along with a superb group of Mozarteans — Gundula Janowitz (a fulsome-voiced and exquisitely limpid Pamina) and Nicolai Gedda (one of the most versatile tenors of all time — equally at home in the music of Mozart or of Samuel Barber, for whom he created the role of Anatol in Vanessa) lead a first-rate cast. It is hard to imagine a better Queen of the Night than Lucia Popp and there have been few basses to surpass Gottlob Frick’s Sarastro. A recording which is a true touchstone in opera.” 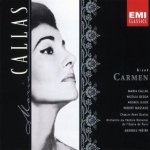 “Maria Callas had to be represented, and it was a debate as to whether I’d select her extraordinary recordings of either Lucia or Norma — both of which show her as an amazing exponent of the bel canto style. But I chose this recording of Carmen (a role she never sang on stage, by the way), because to me she captures the essence of Bizet’s often elusive heroine. Again, Gedda is sublime — one of the few tenors capable of singing the last note of the “Flower Song” as written — with a dimenuendo. Robert Massard and Andrea Guiot are perhaps somewhat undercast as Escamillio and Michaela, but they bring authentic French style to the proceedings, as do the other artists on the recording. There’s a story that Onassis was waiting impatiently in his jet for her to finish the final takes of the Quintet — Georges Pretre certainly was moving the tempo along! A unique document of Callas — a supremely great singer.”

Ricky Ian Gordon recommends:
Vanessa (Barber)
Metropolitan Opera
Dimitri Mitropoulos, conductor
Eleanor Steber, Nicolai Gedda, Rosalind Elias, Regina Resnik, Giorgio Tozzi
RCA 7899
“Every single voice on it is one of the greatest voices ever and the opera is magnificent. When you listen to this recording, you cannot believe what a golden age of singing that must have been! Samuel Barber’s score aches with Chekovian longing.”

EMI Classics 0724356699625
“The depth of commitment to every word and every note is what every singer and musician should strive for. Janet Baker seems to be a messenger from the world behind the world, and Sir John Barbirolli seems to be leading angels through high waving grass silently.”

Lulu (Berg)
Opéra national de Paris
Pierre Boulez, conductor
Teresa Stratas, Yvonne Minton, Hanna Schwarz, Franz Mazura, Robert Tear
DG Imports 463617
“Teresa Stratas should be the paradigm for how to sing and act and create a character… and Lulu is one of the greatest works for the lyrical theater ever. This world premiere recording of the three act version of this masterpiece, led by Boulez, is hair-raising and Stratas is just the beginning… everyone on this recording is brilliant, Mazura’s Dr. Schon, Tear’s Alva, Minton’s Geschwitz… a must have.”

“This is a heartbreaking portrayal of a character who seems to leap off the CD at you, and when you listen to the entire opera, you know who he is and what he is about, and what Thomas Mann meant, and what it means to sing and act (in English as well!). Benjamin Britten seemed to enter this story as if stepping into Cinderella’s shoe…Venice seems to glisten and vibrate in every gurgling note as does the yearning in Pear’s portrayal of Aschenbach. John Shirley Quirk is also a MASTER at creating several different protagonists with brush strokes that are all at once, specific, and inspired. I came home from college for the American premiere of this at the Met, after listening to this recording over and over again. It is one of my favorite pieces.”

Wozzeck (Berg)
Orchester des Deutschen Opernhauses Berlin
Karl Böhm, conductor
Evelyn Lear, Dietrich Fischer-Dieskau
Deutsche Grammophon 435 7052 GX 3
“Both [Lear and Fischer-Dieskau are] incredible, as was Karl Böhm’s conducting… as is Berg’s opera. When I was little, I would play Marie’s lullaby over and over again…Evelyn Lear has both a warmth and a steeliness that makes Marie’s destiny seem inevitable, and Fischer-Dieskau was incapable of making a dishonest sound, thereby sounding beleaguered and utterly victimized.”

So, Sybaritic Faithful, do you have any of the aforementioned recordings? Do you agree with the list put forth by Charles MacKay and Ricky Ian Gordon? What else should be included in the list? Give me the details on all the face-melting/heart-melting/aur-gasmic recordings you’ve found…