It isn’t rare to find musical siblings who perform together, whether they be piano duos like the Labeque sisters, wind players like the Marsalis brothers, or pop singers, but to find a trio of sibling opera singers is not common at all.

The Costa-Jackson siblings, Ginger, Marina and Miriam, are close in age in their early 30s, each with a different type of voice and with, so far, a total of sixteen years of opera performances between them. Already, they are reaching the top.

Ginger Costa-Jackson, a mezzo-soprano with organ-rich low notes and a wide-ranging agile voice which can encompass fast runs and high notes with ease; Marina Costa-Jackson, a lyric soprano also with easy high notes, and Miriam Costa-Jackson, a coloratura soprano who has no problems hitting what seem like impossibly high notes squarely on pitch and do acrobatic runs at full speed, came together Saturday night at McCaw Hall to give a recital.

Ginger and Miriam had just finished the run of La Cenerentola at Seattle Opera, Ginger in the title role, Miriam as one of the step-sisters. Marina joined them and the three performed opera arias, musical theater songs and favorite Italian and Neapolitan songs their Sicilian mother used to sing to them, with Seattle Opera chorusmaster John Keene at the piano.

It was done with lighthearted sisterly kidding around the stage which was set with a couple of pieces of furniture for the girls to sink gracefully onto and the Cenerentola set library as background. They sang solos, duets, and trios plus some arrangements, including an unusual encore of “Nessun Dorma” from Puccini’s Turandot, famous as tenor Pavarotti’s signature aria, which worked as though originally composed for three girls.

One selection after another was a stand out: a sultry Ginger in the “Habanera” from Carmen, which she sang at Seattle Opera last spring; Miriam’s “The Nightingale” by Alyabyev, with her extraordinary range and the purity of her high clear notes; Marina’s “Vissi d’arte” from Puccini’s Tosca; Ginger and Miriam in a breathtaking performance of the “Flower Duet” from Delibes’ Lakme.

Clad in sumptuous ball gowns, they changed in intermission to slinkier ones—and used microphones for their musical theater choices. All three joined together for “You’ll Never Walk Alone” from Carousel, and “I Could Have Danced All Night” from My Fair Lady, while Ginger and Miriam sang the delightful duet “A Boy Like That?/I have a Love” from West Side Story, the heated discussion in song between Anita (Ginger) and Maria (Miriam). Ginger, particularly, changed the timbre of her voice from opera style to musical theater style.

Lastly, the three paid tribute to their mother, who was in the audience and who rose for a brief acknowledgement when the spotlight reached her. The songs from their childhood that she sang and they learned, such favorites as “Sul mare lucicca,” “Funicuculi, funicula,” “O sole mio,” they took turns to sing solo or together.

All three have excellent pitch sense, though there were a few, a very few, moments when one or another was a tiny hair under the note. And the evening was enhanced by captions from the opera’s dramaturg, Jonathan Dean, including a passing reference to the new Seattle Opera general director, Christina Scheppelmann.

Ginger’s voice is remarkable as was clear in her role in La Cenerentola: a beautiful timbre, enormous range with no break between top and bottom, absolutely on pitch, and nuanced. Miriam, who has only just begun to sing outside school, is also one who stands out. There are many coloratura sopranos around, but not only is her technique as solid as her sisters’, her range large, her highest notes ringing, not screeching, but she changes her use and width of vibrato according to what she is singing, so that top notes and fast runs can be pure and clear. It felt a little as though Marina, the lyric of the three, was pushing too hard much of the time and she didn’t moderate her vibrato at all, though it could have used more shaping. Nevertheless, if she wasn’t singing with her sisters, she would be welcomed to sing anywhere, but the other two are amazing.

Philippa Kiraly has been writing classical music criticism since 1980, for several newspapers in northern Ohio and Seattle, magazines, both local and national, and blogs. She is passionate about the importance of independent criticism for the fine arts, an art in itself which is dying with little interest by many publications and no longer a viable career for most. But writing for tickets is always worthwhile! 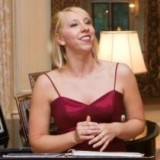